*Originally published in The News:

On the 4th of October 2015, the Democratic Students’ Alliance, an organization of left-leaning students, called for a protest in Lahore against the ban on student unions in Pakistan.

The protest was attended by students belonging to various chapters of DSA including LUMS, Government College University, Forman Christian College, Punjab University and Beaconhouse National University. They were also joined by young activists belonging to the Awami Workers’ Party, the Progressive Youth Alliance and Ali Aftab Saeed who came to show their support. The protest was one of the many follow-ups planned by DSA for their plea sent to the Chief Justice in August 2015 to take notice of the student union ban.

Participating in this protest spurred a number of observations regarding the protest culture in Pakistan which require emphasis in view of public protest and assembly as two rights critical to any democratic dispensation.

One of the most important demands spelt by the situation in Pakistan today pertains to the idea of independent mobilization, divorced from politicization relating to political parties but not political issues, and the need for it to take root in Pakistan. And it is vital for any culture of civil society action here to be based on the belief that any ordinary, concerned person can independently take initiative both as his right and duty as a citizen of the state. The recent protests and rallies taken out by parents against a hike in fees of private schools and their success should only provide impetus to the idea of civil society organization and action operating within the scope of democratic liberties.

This particularly resonates when kept in view of the late Eric Hobsbawm’s emphasis: “Depoliticization of a great mass of citizens is a serious danger, because it could lead to their mobilization completely outside the modus operandi of all kinds of democratic politics.” 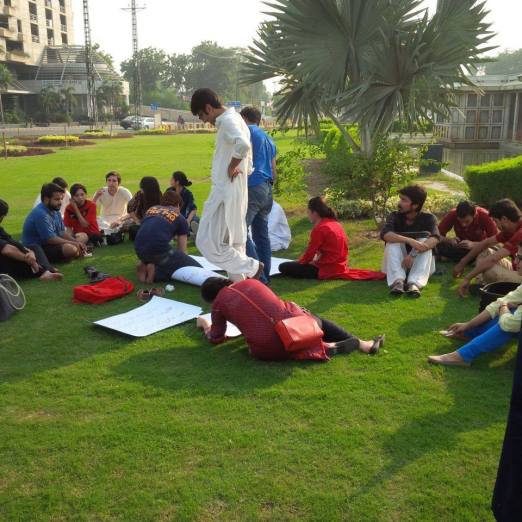 This is especially crucial for the youth in Pakistan, which forms a population bulge today and is increasingly faced with prospects of a future which appear bleak at best, that they know they can negotiate their present and future within the realm of democratic rights, expressions and possibilities.

However, for students several strands of difficulty confront them regarding the issue of mobilisation and action; one of which is the education vs. activism binary that pronounces an engagement in activism as a denouncement of commitment to education. In his book on Eqbal Ahmad, Stuart Schaar mentions that Ahmad argued in 1992: “The educational purpose is truly well-served when students are helped to develop a moral outlook…when they know that a primary purpose of learning is to elevate the quality not merely of one’s personal and family life but of the social environment.” And as an expression of awareness and action, student mobilization clearly complements the essence of education. This is a fact evidenced by numerous student movements which have dotted global histories including Pakistan’s, where students have constantly stood up since the very beginning; from the creation of the country, against Ayub’s ‘Decade of Decadence’, Zia-ul-Haq’s regime to Musharraf’s rule.

But the reason for this is association of activism with a lack of commitment to education also owes itself to the predominant attitude towards activism in Pakistan, which is not just of apathy but also of antipathy; seeing activism and civil society mobilization as futile activities that will yield nothing. Personal detachment from activism is coupled with looking down on those who are engaged in it. It is perhaps the prevalence of this mindset that has acquiesced with the deplorable conditions in Pakistan which have been perpetuated regimes after regime relying on public inaction as a prop to their own indifference regarding the country.

Yet this perception towards protests and activism has been heightened and expanded into one that also demonizes them, while completely disregarding Pakistan’s rich history relating to them, as foreign cultural imports lapped up by the godless and west-loving ‘liberals’. Creative methods of keeping the people engaged, such as music, during events of protests and activisms are especially frowned upon in the country. Everyday Rebellion, a documentary ‘about creative forms of nonviolent protest and civil disobedience worldwide’, which was screened at the Karama Human Rights Film Festival 2015 in Gaza does much to particularly throw light on this aspect as not only something that is organic during moments of mobilization but often also critical to their success in sustaining the spirit of collective solidarity, action and unity.

However, a most alarming aspect related to the larger perception of activism and protests in Pakistan is the scandalization of female participation in them. This was a phenomenon that became notoriously prominent in the spate of attacks hurled at Imran Khan’s dharna last year, which disagreements aside, must be lauded for having created, encouraged and welcomed space for women. In a country where a woman is discouraged from having opinions of her own by society, their expression and demonstration in public spaces will naturally be a cultural anomaly to be condemned. This scandalization is but a part of the larger problem women here face regarding public spaces and places, which are designated as alien territories for women in which their presence and visibility are cultural anomalies. But for any culture of mobilization, protest and action to thrive to the benefit of progressive changes in Pakistan, the normalization and acceptance of female participation is imperative.

During the DSA protest we began clapping to provide greater rhythm to our chants and slogans and it was during this that two men on a motorcycle construing the act as some sort of celebration jokingly commented “anday sastay hogaye hain?”. But if this mobilization, scant for now, and collective expression of consciousness and conscience persists and grows as both a right and duty as citizens of a state, who knows, someday we might really be clapping for having achieved greater affordability of basic necessities of life for ordinary people, and of course, sastay anday.