26th November marks a month since the recent natural disaster struck Pakistan. With a staggering magnitude of 7.5 the earthquake ripped through the northern areas with unparalleled ferocity leaving hundreds dead and thousands of lives shattered. According to the BBC, government officials have stated that ‘at least 10,000 homes were destroyed’.

And it was the issue of the civilian institutions’ response to the devastation that the Senate recently picked up to criticise the government.

The army’s influence in Pakistan is one that is entrenched and patent but despite this being rooted in a long history which has rendered the dominance indelible on the country’s political, social and economic domains, there still remain fronts on which the civilian government happens to give way for the military to spurt ahead, boost and bolster its existing power.

One of these fronts is the response to natural disasters. Within a short span of the recent earthquake’s occurrence, General Raheel Shareef immediately ordered the mobilization of army personnel and resources for relief efforts. This incidence did not escape the recent debate in the Senate which Dawn reported as:

“PPP’s Farhatullah Babar said that Army Chief Gen Raheel Sharif had ordered troops to move to affected areas and carry out rescue work without waiting for the government’s directives. “It was a good move, but its implications should be looked into,” he said. The PPP senator regretted that information about losses had come from the ISPR (Inter-Services Public Relations) instead of civilian department and it showed “incompetence” of the government.”

While any efforts undertaken for the earthquake victims from any quarters of the state were both crucial and commendable, it is important to explore the political implications they also happened to contain. One of the clearest political implications of the army having given the first call for action in aiding the earthquake victims was the contrasting impression of the civilian government’s indifference resulting from its momentary inaction. 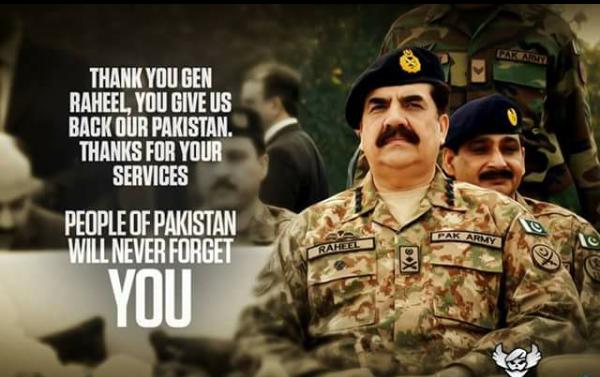 Critical instances like these feed into the popular belief in the Pakistan army’s unparalleled integrity and commitment to the people, inspiring tremendous trust in the military as an institution. This belief is frequently revealed in surveys and polls. The most recent of these was conducted by PILDAT, and while it revealed Prime Minister Nawaz Sharif to be the most popular political leader in Pakistan, it spelt the age-old result for the army which corresponds to its image among the people: as the most trustworthy institution in the country.

However, this division of trust and popularity is striking since it can be mapped onto the larger landscape of power and politics in Pakistan. The separation of popularity and trust is a key feature of the existing system in the country, where a civilian setup of a democratically and popularly elected government rules but often lacks the trust of the population. In case of natural disasters, this distrust is most evident when it comes to peoples’ willingness to donate to funds for the victims; most are more willing to donate if the material and monetary donations are to be channeled through the army rather than the government.

Although this lack of faith and trust in civilian governments greatly owes itself to the failures and corruptions of previous governments, it has also been sown through decades of dictatorship and their accompanying discourses which were used to justify and legitimate their existence by demonizing civilian rule and institutions. Nonetheless, attention must be called to the fact that the pace and degree of response and action, especially in testing cases such as those of disasters, are battlegrounds where governments’ trust is lost and gained.

It is imperative for the government to realize the indispensable importance of time in framing its response, performance and action in all areas of national affairs let alone natural calamities. It is here that the army takes the lead due to government inertia and delay thereby inevitably succeeding in being posited as an institution more responsive, hence closer to the public and their problems. The government’s delayed response undermines its own credibility which is otherwise pivotal in challenging moments like these during which support can be pocketed by elements inimical to peace in Pakistan.

It is no secret that crises of devastation, displacement and dislocation, compounded by the Pakistani governments’ conventionally slow and sluggish response, are often fertile grounds for non-state actors, militant and extremist groups to flourish in by activating their networks to function as relief groups within affected people while there remains a vacuum of proper government presence and assistance.

Another aspect to note relates to the nature of responses. While the PM announced a relief package for the affected people and ordered the establishment of several mechanisms to ensure its effective deliverance to the people, including a crisis cell for coordination between federal, civil, military and provincial agencies, these are still short-term measures. Cash compensations do not adequately, if at all, contribute to the long-term rehabilitation of affectees which is urgently required in the case of tragedies on the scale of the recent earthquake.

In a country plagued by a deep institutional power imbalance, civilian governments cannot and must not falter and flounder in responding to issues, affairs and crises; creating voids, even if temporary, for other institutions and groups to fill in and fragment its credibility and authority that are both detrimental to the health of the state and dent its potential for a truly democratic future.

Writing in his 1995 article ‘The Signals Soldiers Pick’, the late Eqbal Ahmad stated that the end of military intervention in politics hinges upon ‘the legitimacy of the civilian system of power [being] established over a period of time.’

Undeniably, the legitimacy of the civilian system of power is inextricably tied to its credibility which must be firmly established, constantly guarded and advanced. If a civilian system of power has to be maintained, governments must invest it with the credibility it craves, through their governance and performance, which firmly confers upon it the empowering authority it often lacks. Perhaps the idea that credibility must be constructed and cemented rather than let to chip away is too simplistic a proposition for redressing the power imbalance in Pakistan. Yet it is remains essential to recognize that legitimacy, credibility and authority are intertwined with each other and central to the narrative, if not the reconfiguration itself, of the Pakistani state’s distorted institutional ties. In the sombre shade of this, any sign of government lethargy dashes hopes for democratic civilian ascendancy, or so a military press release would concur.

Seldom does the world get to witness nations standing up to take hold of their country from tyrannical heads and their atrocious hands.

Recently it did, watching in fascination as Tunisians came out on the streets to revolt against the corrupt and autocratic government of Ben Ali, their President in power since 1987.

What eventuated this uprising in opposition of unemployment, inflation and for civil liberties that lead to Ben Ali absconding the country just after 29 days of unrest as a young, jobless man Muhammad Bouazizi.

International Business Times writes about him under the title  ‘The Story of Mohammed Bouazizi, The Man Who Toppled Tunisia’ :

“Mohamed Bouazizi was a 26-year-old Tunisian with a computer science degree.

Like millions of angry and desperate Tunisians, he faced the unpleasant combination of poor employment prospects and food inflation. Moreover, the Tunisian government was seen as corrupt and authoritarian.
By December 17, resentment against authorities has been brewing for a while.
To make ends meet, the unemployed Bouazizi sold fruits and vegetables from a cart in his rural town of Sidi Bouzid, located 160 miles from the country’s capital Tunis. He did not have a license to sell, but it was his sole source of income.

He then drenched himself in gasoline and set himself on fire outside the governor’s office. Bouazizi survived his initial suicide attempt. After being transported to a hospital near Tunis, he was visited by President Zine al-Abidine Ben Ali before passing away on January 4.

After his suicide attempt, unrest broke out in Sidi Bouzid. The police cracked down on the protestors, which only fueled the movement. The revolt eventually spread to the capital city.”

For decades, many a nations under totalitarian regimes have eagerly fancied the idea of a revolution – waiting for the ‘right time’ and a leader to take them forward to actualize it but Tunisians have shown that when it comes to taking back the ownership of their country, no nation needs a leader rather their actions have asserted the reality that nations are their own leaders.

Those who had been following the unfolding of events in the Arab country since December had their thoughts about the marches, protests and riots dangling between doubts over their success yet the citizens of Tunisia proved that it is people like them who deserve a country and freedom – for they value and fight for it and in the end, the power and will of the people is what will always surface to reign high.

Award-winning columnist and an international public speaker on Arab and Muslim issues, Mona El-Tahawy has penned-down a notable piece on the happening in The Washington Post:

“For decades, a host of Arab dictators have justified their endless terms in office by pointing to Islamists waiting in the wings. Having both inflated the egos and power of Islamists and scared Western allies into accepting stability over democracy, those leaders were left to comfortably sweep “elections.”

All around him is a depressingly familiar pattern. Libyan leader Moammar Gaddafi (68 years old) has been in power since 1969; Yemen’s Ali Abdullah Saleh (64) has ruled since 1978 and Egyptian President Hosni Mubarak (82) since 1981. Algeria’s Abdelaziz Bouteflika (73) is a relative newcomer, having been in power only since 1999. Not so much fathers as grandfathers of their nations, these autocrats cling to office – and are increasingly out of touch with their young populaces.

No doubt, every Arab leader has watched Tunisia’s revolt in fear while citizens across the Arab world watch in solidarity, elated at that rarity: open revolution.”

This is not only a matter of much relevance and significance for Arabs but also countries like Pakistan, which today staggers towards the precipice of danger finding it hard to balance the burden of terrorism, inflation, poverty, rife corruption, institutional dysfunctions etc – hoisted on its back by years of military rule and political tug of wars for control of the state.

One hopes that the result of the Tunisian rebellion and revolt is a domino effect. Are Egypt, Algeria, Jordan, Syria or Pakistan next? After all, the nations of these countries do possess simmering feelings of frustration and have been forced to swallow too many bitter pills over the years.

Every population is as capable as that of Tunisia to kick start a movement of dissent yet what most of them lack currently is the will, unity and valor of the Tunisians to exercise this, for which they must be saluted.

An Egyptian friend and youth pertinently comments on the whole situation:

“All we lack is the start. What started it in Tunisia is one of the most commonly incidents that you can see daily, a simple man burning himself up protesting for being unemployed, which led to one of the biggest protests in the Tunisian history…

We also need to realize that its our own countries not theirs (rulers), so every right in these countries is ours, not them being so ‘kind’ giving them to us. We should be the feared side.”

While it may be too soon or facile to term this revolt a complete success, it has come to symbolize what can be labeled as an inspiration for countless countries and future order of events.