*Originally published on the Dawn Blog. Unedited version below:

I wonder, will we ever live without this sense of fear and foreboding? This anxiety and fright of you or your loved ones stepping out of the house only to be separated forever.

One of the ways I spend quality-time with my younger sibling is to go to the cinema with him. There have been times when we’ve been there and I’ve been struck by anxiety, and seized by apprehension. What if someone blows this place up today? What if terrorists burst in here? Where is the nearest exit that I will be able to push Abdullah towards? How can I hide him? No, he’s too tall now to be hidden. What will we do if something happens? We shouldn’t be here. What if something happens? What if?

But I am distressed when he goes to school too.

This sense of fear, the sense of loss doesn’t lurk in the dusty corners of our minds, they loom on our hearts, crushingly.

There are texts and emails every now and then. Identifications of potential targets. Security alerts and warnings. Places to be avoided. Emergency drills to be conducted and participated in. Fears to be grappled with.

I thought nothing was left there to break me further after Peshawar, and yet we learn that what is shattered can be broken further. The past few days have reminded me of the 2008-2009-10 days, when we had ninety suicide attacks and five hundred bombings in a single year.

I thought we were past this. I hoped we were. I prayed we were.

Quetta is not Quetta, Quetta is Hazara killings.

Cities are no longer cities, they are signifiers, signposts of tragedies. Of losses borne, of lives mourned.

The violence, the loss has subsumed everything.

The casualties of terrorism go even beyond the lives. They are tragic ruptures in what was once our cherished collective and celebrated cultural and social life and identity. I see cricket and I relate that too, to a loss. The loss of a nation’s love to foreign lands, the exile of a nation’s love.

Everything is a reminder of what we face. There is no distraction, there is no relief.

I am at a stage where I shut myself from social media when a tragedy occurs. Because I am a coward, I can no longer face it. I am selfish, because I don’t want to.

Where does one summon the strength from when all is sapped?

I can shut social media for a while, but I cannot shut torment and turmoil of my heart.

I think of the healers, teachers, sportsmen, artists taken from us, who were never given the chance to know it themselves. I think of the ordinary person toiling all day to put bread on the table of his family, wanting to just return home at the end of the day. I think of the love, warmth and hope plundered from multiple lives and generation with the robbery of a single life, in a single moment.

I wrote this before, I’ll say it again:

There are times when I want to escape Pakistan, perhaps not physically, but certainly emotionally. There are times I want to close my eyes, my ears, my mind and my heart to the suffering in this land, for my own sanity and survival; only to wake up with seething pain realizing that its suffering and mine are inseparable and one.

Each gash and each scar you, Pakistan, have is mine, because your soil is my skin. I feel it, I live it. How can I rid myself of my skin but crush my soul? How can one ever disentangle from one’s roots?

Nearly a month back the attack on Bacha Khan University brought back torment of what is perhaps the most traumatic experience in Pakistan’s collective national memory: 16th December 2014.

The Charsadda attack has been followed by beefing up of security in educational institutions, including the conduction of security drills, trainings for guards and personnel, and even the temporary closure of schools. In assailing the pursuit of education by an environment and atmosphere of fear and militarization, the horror of the APS attack reverberates in educational institutions and students across the country.

This is a militarization that has familiarized students with the grim possibility of never returning home as they leave for schools each day; a militarization out of which schools, colleges and universities have emerged morphed into high-security fortresses; and this is a militarization that has forced revered purveyors of education like Tahira Kazi and the 33-year old chemistry professor Syed Hamid Hussein to build passage for the future of Pakistan not by illuminating the way for students but by extinguishing the very light which was to shine the path: their own lives. It is a dismaying reality that the trauma which accompanies an entire generation of children and youth today, upon which hover fear and threat of death and loss in spaces where only learning, education and hope should thrive, will be an enduring casualty of terrorism in Pakistan.

In wake of the Charsadda Attack, there also appeared to be a dispute between the educational institutions and the government on the issue of security provision. While a legitimate demand to a certain extent, the government’s pressure on the administrations to provide and take charge of all security arrangements once again attests to the government’s willingness to pass the buck, surrender and assign surrogates for what is chiefly the state’s key responsibility; the protection of the lives of its citizens.

In an article based on analysis of school attacks in Pakistan, Rana Muhammad Usman draws focus to alarming trends and figures; including the fact that in four decades South Asia has witnessed 1,436 attacks on education, out of which 60% occurred in Pakistan. Only nine days after the attack on Bacha Khan University four police personnel were shot dead on the Munir Mengal Road in Quetta by the TTP. There is little doubt that violent incidents have slid down the frequency scale since last year but the continued occurrence, even if sporadic, of such attacks and assaults calls attention to unfinished business for both the terrorists and the state. Writing for The New York Times, Mohammed Hanif nails the matter at hand:

“Security experts, a group likely to find a silver lining in hell, say that the Taliban are targeting schools because these are soft targets – and that this is proof the Taliban have been weakened and can no longer attack cantonments or airports. Apparently, we are supposed to take solace in the slaughter of our children because our cantonments and airports are safe.”

However, beyond the issue of schools and security, the Bacha Khan University attack has brought to fore a number of disconcerting realities that remain unchanged since 16th December despite grand proclamations of will and resolve to obliterate them.

The grand National Action Plan which was devised as a comprehensive programme for tackling extremism and terrorism appears to be in tatters today. Banned organizations and ‘assets’ still operate freely, and while the interior minister prevaricated and bemoaned a fictional lack of evidence needed to act against him, the brazen-faced and contemptible Abdul Aziz spat on the writ of the state by informing the nation of his ‘negotiations’ with the agencies regarding his case. Even in this announcement, he continued to spout and spew his hate, accusing a brigadier in ISI of ‘the other sect’ of ‘conspiring’ against him.

Recently, news of the Sindh government’s consideration of Friday sermons’ regulation has also surfaced. While the regulation of sermons is certainly a significant step in examination of the influence sermons wield and exercise, there still persists a pressing need to stem the seeds that require the regulation of sermons in the first place: ideologies of extremism, hate, strife and violence. It is ideology that beckons back to the necessity of madrassah reform, a contentious and difficult issue in a country where any attempt at reform and regulation of religious institutions or religion-inspired laws is seen or perhaps cleverly construed and concocted as an attack on Islam itself.

Madrassah reform is a daunting task but the consequences of not dismantling ideological and territorial sanctuaries that maintain an infrastructure of extremism are even more disquieting – for which every organ of the state has to be united and mobilized in orientation, policy and action, until which all gains against terrorism in Pakistan will be tenuous at best, as the targeting of Bacha Khan University has shown.

Most importantly, the Charsadda attack has accentuated the urgency of a thorough inquiry and investigation into the Peshawar attack, which the parents of the APS students have been tirelessly demanding despite numerous attempts to thwart and silence them. Why is it that the demands for an investigation are being spurned, who does an inquiry threaten, and why does it threaten them? Although it will provide no closure to the insurmountable grief of the bereaved, an investigation will provide some semblance of accountability, answers, and a degree of insight that may be used to prevent further lapses and failures which endanger countless lives.

It is therefore crucial that the narratives of success in the drive against extremism and terrorism, being continuously churned and fed by the government and military, are constantly and consistently questioned because no longer can the inaction, inertia and apathy endemic to the state and government, but inimical to Pakistan, be afforded. 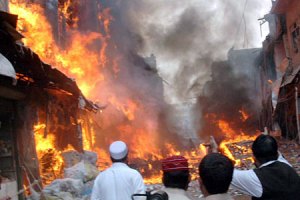 “Which was once formed on the name of peace,
Now roam it freely raven beasts,
Vicious intentions of these shadows of feinds,
Drenched with the blood of its sons are this land’s streets,
Fear is the thorny crown of each heart,
Piercing the inside with each breath taken,
Blasts rock the ground beneath billions of feet,
Prayers on murmuring lips and beliefs left shaken,
With each step of loved ones out of secure doors,
Dread greets each heart beat,

Emergency declared in hospitals,
Cities on high alert,
Back to the dim despondence we revert,
From the little intervals of glimpses of silence,
Considered by us as peace,
Hope and light upon us readily frowns,
Students sit home,
With schools shut down,

With each bomb making a crater,
For many dawns the birth of dooms-day,
Slips the life out of mourning mothers and moaning daughters,
Running to places to collect the remains of dead sons and fathers,
The dark clouds of bereavement linger on many homes,
Stripped are even mosques of security with blood-painted domes,
Laughters disappear from twinkling faces,
For witnessed they have the killings of their parents,
And from their little minds horror fails to be erased,

Targeted are funerals,
Above our heads fly foreign drones,
To oblivious innocents whose lives they leave torn,

Amongst ourselves,
Rove our invitations to death,
Militants under the skin of a human,
Mullahs with beards,
And devils with no beards but sitting on thrones as rulers they appear,

Wake up ‘O My People!
Wake up!
Why do you still sleep after sixty-three years?
When blood-stained are our frontiers?
And the sounds of war unleash in our ears?
Defend your identity,
Raise you head,
Let not the truth of Islam perish,
In what the extremists flourish,
Hands are abandoned by the Creator,
When they remain only to beg and pray!
Wake up ‘O My People And Fight!
For this burning heaven,
This land of pure,
Where rascals rule!
How many more tears will you shed?
To your children will you tell of a life of fear that you lead?
And the coming tomorrow,
That belongs to you!
Make Jinnah’s Pakistan with the blood in your veins,
Wake up and and salvage your fate!”