Newspapers recently reported that a group of students and teachers who survived the Peshawar massacre had been sent on a trip to China ‘aimed at healing the mental scars of their ordeal’; and that the bereaved parents of the 130+ children killed would be sent on pilgrimage to Saudi Arabia. Although officials maintain that the trip was borne out of suggestions and consultations done with psychiatrists regarding the process of healing, reality offers a far difficult road to recovery for Pakistan.

With 50,000 massacred – yes massacred, not sacrificed; let us not romanticise the bloodletting that consumes Pakistan; for a sacrifice is willing and conscious, but a massacre is plain butchery – the sigh between mourning countless tragedies and the breaths heaved between cries is the only peace the nation can prise.

The Shikarpur slaughter that took away 60+ lives has revealed the empty change the Peshawar tragedy spurred in Pakistan in the form of standard hollow condemnations, promises and eyewash.

Palliative measures such as the lifting of the moratorium on death penalty and hangings of convicted terrorists may satiate national vengeance, but do not and should not dampen the need for national justice; for which a solid anti and counter-terrorism policy is essential. 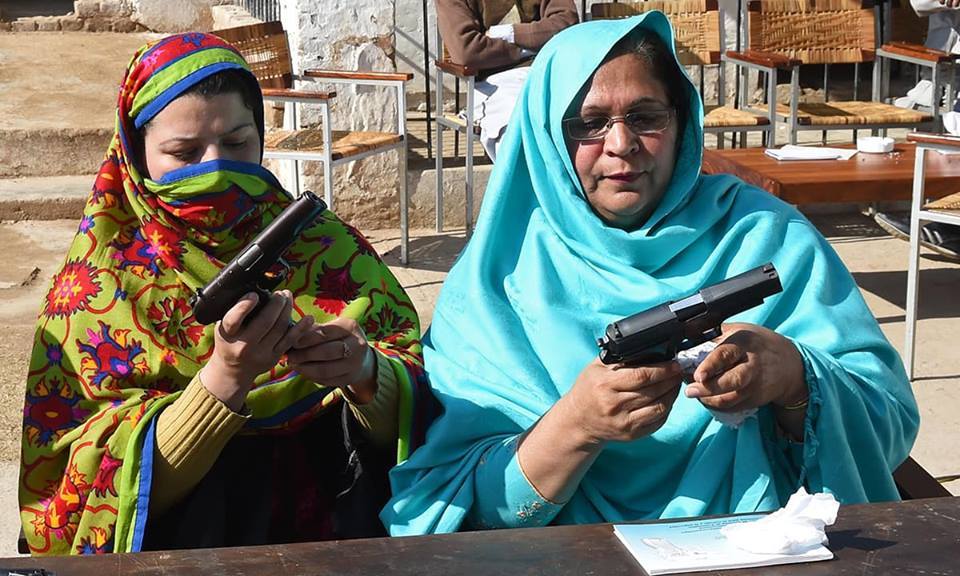 Furthermore, there has naturally been no shortage of the absurd since the KPK government’s decision to allow teachers weapons inside schools stands glaring. As shocking is the decision, it is also a tragic testament to the state’s loss of its monopoly on violence, cruelly emphasised by terrorists, and its reaction to it which seems to border on surrender and acceptance. Such an acquiescent attitude clearly signifies the state’s indifference and inability to protect the lives of its citizens and guarantee their liberty, safety and security. And from the KPK government’s decision, it appears that the solution to this loss of state monopoly has been found in compounding the problem by doling out more and more shares of the monopoly to segments of the violence-ridden society.

More recently, arrests were made of the members of the civil society, which included the dauntless Jibran Nasir, protested in Karachi by holding a sit-in against the Shikarpur imambargah bombing and the ‘outlawed’ ASWJ. The protesters’ demands included naming all banned organisations on media; closing the offices of all the banned organisations, removal of their flags, erasing their wall chalking; taking action against Aurangzeb Farooqi, ending his police protocol; and providing treatment to patients who need care in Shikarpur, Sukkur, Larkana hospitals in Karachi and Hyderabad. Abbas Nasir, while reflecting on the hopelessness prevalent in Pakistan, penned in Dawn:

“The party in power at the centre never staked a claim to any progressive mantle. But the party in power in Sindh claims to be the keeper of the legacy of pro-people, even secular, politics in the country. Look at how it has capitulated to the religious ultra-right.”

The arrests of the protesters served, yet again, as shameful reminder of the state and government being held hostage to non-state actors and organizations such as the ASWJ and SSP; committing complicity in the crimes perpetrated by these individuals and organizations by way of pandering to them and putting up frequent shows of spinelessness when it comes to them.

The persecution and troubles tormenting religious minorities such as the Shias in Pakistan are very much a part of the problem of terrorism and extremism; dealing with which cannot be discounted if Pakistan is to overcome this crisis. The blood that was shed in Shikarpur was in the name of the same ideology that shed blood in Peshawar. Therefore, to ignore or separate the se

ctarian angle from terrorism and extremism in Pakistan would be to have a blurry and weak vision of the danger the country faces.

Buried under palliative measures, national amnesia, short-lived bouts of outrage; and the empty promises and deliverance that have become the crowning glory of the PML-N government, which seems to be competing against the records of cluelessness and incompetence set by the previous PPP government, are the concrete steps that remain far from being taken in Pakistan’s fight against terror. Concrete steps that disturb the long-cherished equilibrium and existence of policies and trends in Pakistan including the establishment’s notoriously duplicitous policies, the ties of patronage and alliance Pakistan’s political parties pride themselves on with sectarian outfits; and the cowardice that crowds the corridors of powers in Pakistan from taking on extremism and terrorism with sincerity and tenacity.

The trip to China may temporarily divert the children’s attention, but the usurpation of their childhood, that no child should ever have to bear, is consummate and irreversible.

Comparing the response and reaction in Pakistan after the Peshawar Tragedy to the reaction in France and Jordan after the Charlie Hebdo killings and Muath Al-Kasasbeh’s barbaric murder by ISIS of a nationwide outpouring of solidarity and grief coupled with government resolve, the Pakistan Votes page on social media commented with a quote from Waseem Altaf:

“A fractured polity, polarized political entities and a divided crowd of people, with a security establishment which wants exemptions for certain groups (read proxies) and a spineless leadership is what we have to fight the menace of terrorism.”

Sending the children on trips will not suffice, providing them a future better than their past will. And for that, a lot more needs to be done. Until then, all is hollow healing.