*Originally posted on the Dawn Blog.  Unedited version below:

Bollywood classics and the latest romantic songs rung loudly against the images of Imran and Reham Khan as a sense of festivity occupied most channels yesterday owing to the couple finally tying the knot. As lowkey and simple was the marriage ceremony, it managed to kick up an even bigger storm in Pakistan.

Jon Boone of the Guardian noted and wrote:

“For Pakistan’s news channels it was the equivalent of a starting pistol fired on a sudden royal wedding, but with no footage to satisfy the audience.

They did their best, overlaying with fireworks the few available stills of the couple while traditional wedding music played over video of impromptu celebrations thrown by Khan’s supporters around the country.”

Features on the new Mrs. Khan and her biographical information ran as tickers on several channels along with footages and pictures, astrologers were called in to foretell the future of the marriage; Imran and Reham’s faces were morphed onto pictures of gaudily dressed bride and groom, relatives of the couple were contacted and of course, social media also ran amok.

From following Imran Khan sisters and issuing news of their absence at the Nikkah, which journalist Shiraz Hassan aptly called ‘Phuphu Journalism’ on Twitter; to inviting astrologers to argue over the strength of the new union between the two individuals, going as far to predict when a khushkhabri will come; Pakistan’s media once again succumbed to the temptations of trashy sensationalism. And once again, it has thrown light on the long way it has to go before being a beacon of real, responsible and mature journalism.

As much as the crazed response to Imran Khan’s marriage and judgmental comments on Reham Khan are deplored, they are but nothing new in a culture in which privacy is an alien concept and prying is a popular practice and norm. Unfortunately in Pakistan, where many hold the audacity to foresee God’s will and declare people bound for hell, anyone’s business is everyone’s business. It is therefore little wonder and slightly understandable that Imran Khan’s marriage was made subject of such a reaction and response.

However, it has still been shocking.

For a nation that saw the coldblooded, barbaric murder of 140 children less than a month ago, a mood as jolly and celebratory as that espoused by the media and the obsession sparked within the people was nothing less than abhorrent. Yet it signaled the quick shifting of priorities, focus and heart in Pakistan. Pakistan seems to have internalized and entrenched the norm of apathy in the form of temporary outrage, temporary outpouring of grief and temporary empathy which are proudly shrouded in the glossy garb of ‘resilience’. Any hope that the Peshawar Tragedy would strike and shake the lifeless body of emotion, reaction and empathy in Pakistan with horror and fury into galvanization dims in the face of this reality. Our apathy has become complicity in the bloodletting. 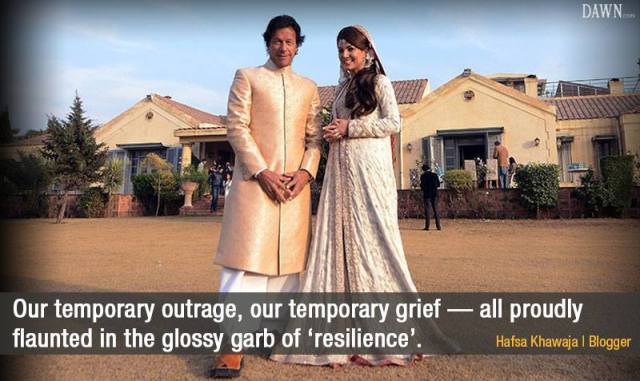 In view of which, maybe it is too much to expect Pakistan, institutions and people in it to put up a show of sobriety and solemnity; to, for once, hold a monstrosity alive in head and heart and drive a stake through the monster once and for all.

It is often here said that USA had one 9/11 but Pakistan has one every day; yet such a spectre as was witnessed after Imran and Reham Khan’s wedding would never have been witnessed in America less than a month after 9/11. They never forgot, and we already have, as always.

*Originally published in The Nation.
Unedited version below:

Some tragedies are difficult to erase from national memories.  Some wounds are difficult to heal. What happened in Peshawar was a monstrosity beyond evil, a calamity beyond tragedy. The calculated, cold-blooded murder of helpless, defenseless, innocent children will always remain, neither a wound that heals, nor a stain that fades, but a scar right in Pakistan’s heart that shall only deepen with time. It will remain forever. 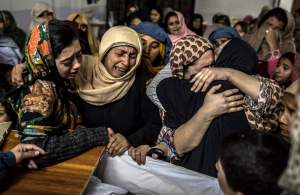 In an air of seething anger, mourning and vengeance, the government decided to lift the moratorium on death penalty. As understandable as this is for the savages who have torn through Pakistan’s soul, it must be realized that the lifting of the moratorium is once again a cosmetic attempt to defeat terrorism.

Pakistan can no longer do without recognizing that the monster of terrorism has multiple heads and tackling it honestly.

For once, the state and military establishment must end the dubious, contradictory and damnable distinction between the “good” and “bad” Taliban, for the advancement of ‘Strategic Depth’ that has become the death of us. It is important to mention the late Eqbal Ahmad, whose prophetic warnings regarding Pakistan’s future vis-à-vis the policy in Afghanistan during and after the Afghan war were made little use of, penned in an article, titled ‘What after strategic depth?’ in Dawn on 23 August, 1998:

“The domestic costs of Pakistan’s friendly proximity to the Taliban are incalculable and potentially catastrophic The Taliban are the expression of a modern disease, symptoms of a social cancer which shall destroy Muslim societies if its growth is not arrested and the disease is not eliminated. It is prone to spreading, and the Taliban will be the most deadly communicators of this cancer if they remain so organically linked to Pakistan.”

The scourge of extremism and terrorism cannot be defeated if Pakistan’s military establishment pursues policies of duplicity; with a selective fight instead of an all-out war against all terrorists without distinction and second thought, since the alternative is clearly at the expense of Pakistan’s peace, stability and future.

As vital it is to battle the Taliban physically, it is even more crucial to battle them ideologically, culturally and socially.

Pakistan’s mosques must be regulated and rid of the hate speeches made against other religions, religious minorities, sects and the West, that pass for sermons. These have converted the country’s mosques into sanctuaries breeding hate, bigotry and intolerance with bloody repercussions.

Jibran Nasir: The quiet lawyer and activist who is taking on Pakistan’s Taliban (The Independent, photo taken by Mosharraf Zaidi)

The people must reclaim their mosques, just as the brave Jibran Nasir led people in Islamabad rallying for FIR against and the arrest of Abdul Aziz of the Lal Masjid for his audacious refusal to condemn the Peshawar massacre in clear words live on television. It is hoped that this spirit inflamed by rage and sorrow crystallizes into a sustained campaign and movement by the citizens to reclaim Pakistan; for any ‘maulana’ or ‘mufti’ whose tongue stutters to clearly condemn extremists and terrorist acts of atrocities must be taken to task by the people and state; and if the state does not take them to task, the people must take it to task too. Let it be clear today that a lack of condemnation is an act of complicity. Pakistan has paid enough for terrorist apologists in its midst.

The media must also stop the sensationalist and luxurious provision of airtime to such men in the guise of interviews and calls; offering them opportunities to shamelessly propagate their views and promote the cause of the extremists in turn. Pakistan cannot and must not tolerate any terrorist apologists from any sphere, be it religious, social or political since they are in abundance.

Furthermore, Pakistan cannot envision the eradication of extremism and terrorism unless the political patronage of militant organizations like the SSP, LeJ and ASWJ are explicitly ended. It is this country and nation’s misfortune, that not only does it have leaders who are spineless and irresolute in the face of a cancer that continues to consume Pakistan; but also have links; concede, pacify and pander to organizations that are proud ancillary warriors to the ideological evil.

Death penalties may satiate our desire for justice, but these cannot compensate for the alarming flaws plaguing Pakistan’s judicial system that is unable to prosecute, convict and punish terrorists. Mentioned in Chris Albritton’s Daily Beast article, the U.S. State Department’s Country Reports on Terrorism 2013 states:

“Intimidation by terrorists against witnesses, police, victims, prosecutors, defense lawyers, and judges contributed both to the slow progress of cases in Antiterrorism Courts and a high acquittal rate.”

According to Dawn, since 2007, over 2,000 alleged terrorists have been freed by the Anti-Terrorism Courts (ATCs) and even re-joined terrorist outfits. Therefore, as long as Pakistan’s courts are not empowered and let murderers like Malik Ishaq walk free with the blood of hundreds of Shias on his hands; death penalties will only remain a superficial step taken in the stride for serving justice.

Moreover, the curriculum and textbooks taught in Pakistan must be reviewed and revised to replace the patchwork of intolerance, hate, bigotry, xenophobia and jingoism it has currently bred by one which fosters a pluralistic national mindset of tolerance, inter-faith, inter-sect, inter-ethnic harmony. The distortions and crass obfuscations in the textbooks may have served the state well but they have certainly not served the country and nation well.

Pakistan must also recognize that the disease of extremism and terrorism is home-grown. The hordes that attended Arshad Mehmood’s funeral after his hanging were our people, they were Pakistanis. Those who fund, abet and sympathise with these are Pakistanis. Arshad Mehmood and his ilk was Pakistani. The hundreds of children slaughtered in Peshawar were Pakistani, this is Pakistan’s war.

Lastly, as a people, we must rupture our resilience. Let us let it be known that we will not forget nor forgive; we will neither recover nor rest until we win this war; a war within us. We must no longer be quiet; we must let the pain of Peshawar never subside if Pakistan is ever to remain alive. Let us feel the loss that can never be undone. Let us walk on the blood-splattered shards of Peshawar, let us never forget what happened there; let us not wash this away from our hearts and minds by the flimsy cloth of resilience.  Let us know that our silence and resilience is now complicity.

Let us find it difficult to sleep every night knowing this soil is fresh with the splattered blood of its beautiful children. Let us count the 50,000 which 140 more have joined.  Every inch of this land is soaked with the blood of its own.

Let us be resilient no longer if we are to count no more. 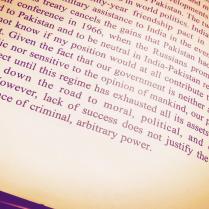